The Hard Disk Drive, resulting in the acronym HDD we’ll use from now on is always defined as secondary memory. From the perspective of the operation of the CPU so it is.
Actually the CPU works directly with data or instructions that are at L1 cache and so on Main Memory (MM). Hence the principal name. The CPU is designed to read and execute instructions in the MM addresses. Only what’s in it is processed by the CPU, in its ongoing cycle of search and execution.
But the MM and the higher hierarchical levels are volatile, i.e. the values ​​recorded in it will only remain there while the computer is powered. Cut the power and everything is vaporized, everything is lost.
It’s in the HDD that all information, data and programs required to operate the CPU are in a persistent and non-volatile state. It’s in the HDD that the MMU (Memory Management Unit) will get the data CPU needs to have in the MM to process. It’s in the HDD that is contained the information needed to boot the computer. It’s in the HDD that the Operating System (OS) is resident, from where it’s taken to the MM to command the computer.
In short, the true and great computer memory is the HDD. Far, far away from the derogatory definition of data storage device. The programs are not stored in the HDD. What’s stored in the HDD are the program installers and the data files. The programs are installed on the HDD, so that the OS can put them in the MM in order for the  CPU to run them.
By the way, let’s recall that the HDD is also part of the Main Memory, constituting its extension, the SwappFile or Pagefile, which is part of the Virtual Memory, issue that we will address together with the OS.
In this chapter we will analyze the HDD electromechanical operation and the physical way of recording data in it. The logical way how the data is organized and accessed is dealt by the OS, using for it its File System, which we’ll discuss in the next chapter.
The data is recorded in the HDD under the shape of magnetic fields. Therefore, its greater or lesser capacity ranges in a directly proportion with the density of magnetic fields that it can have. This is called the “Areal Density” or density per area, once converted into bits that define its logic 1 or 0 state by the level of electric tension they carry.
Doing a bit of history will say that the first used HDD had a brutal density of 2,000 bits/square inch. Currently the HDD have densities that exceed 400 Gb/in2, i.e. 400,000,000,000 bits/square inch. And always growing.
We can say that we undoubtedly consider the HDD as one of the wonders of human technological capability, when looking to the accuracy that is achieved in the operation of an electromechanical device within a nanometer level measurement behavior. Read/write heads are flying over the plates at less than 10 nanometers. When we remember that we’ve used a Laptop running inside a TT vehicle during an off road trip drawing our path in military maps we are indeed convinced about what we’ve stated before.
Given the aforementioned densities we can perceive the intellectual effort to put in the shape of magnetic fields information about 400 billion bits in about 2.5 square inches. As we shall see, here the values ​​0 and 1 do not match to a electrical load not even to the magnetic field orientation, yet to magnetic fields orientation changes.
Extremely sensitive and small read/write magnetic heads were built, as the magnetic field was reduced in a such way in its size and intensity,   fantastic aerodynamic performances were achieved by using those heads at less than 10 nm from the HDD plates revolving at a normal speed of 7,200 revolutions per minute.
Complex algorithms were elaborated allowing with a few bits to make extensions to much larger compositions thereof.
But nothing like reading the chapter in order to see the mechanical composition of an HDD, its several electromechanical components, their development and how they interact for the same purpose, how the HDD is physically organized so that we can obtain any data anywhere in it simply indicating its address. An address that is not in bytes but in sectors (500 Bytes) and is done in CHS (Cilinder, Head, Sector), the geometry of an HDD, different from manufacturer to manufacturer. We’ll see how.
In the next chapter we will see how the OS rearranges the 2 TB of information (e.g.) in order to quickly get to know the address of every piece of data that it identifies as a File.

See the global synopsis of this work 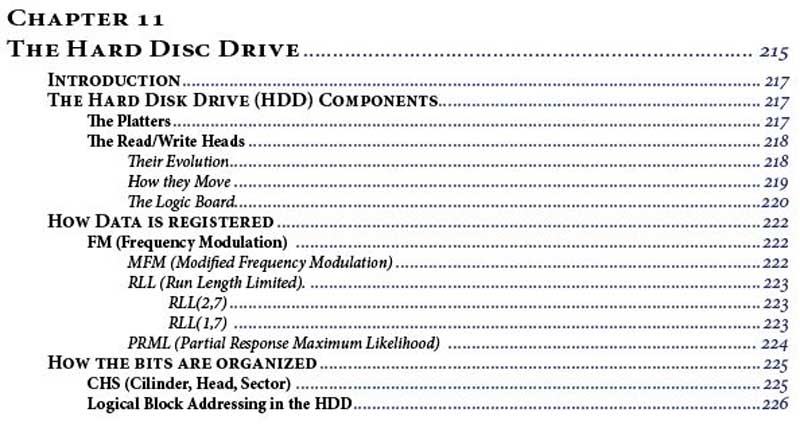